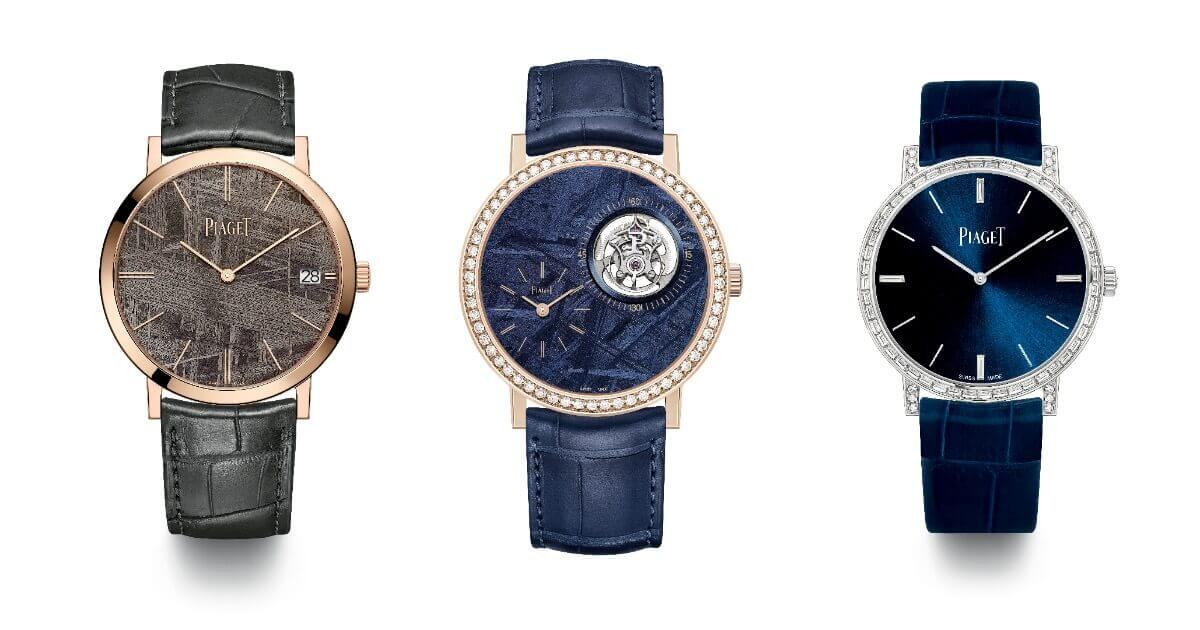 One of the key areas of savoir-faire associated with the Maison Piaget is the technique of gem-setting. As one of the very few traditional watchmaking manufactures with an equally strong focus on jewellery, Piaget is uniquely placed to create pieces that blend watchmaking with the precise skills associated with working in precious stones. These stones, formed under tremendous heat and pressure and extracted from deep beneath the earth’s surface, highlight the eternal brilliance of a Piaget timepiece.

The 36mm Altiplano High Jewellery is an essential model in the elegant collection of Piaget, speaking to the feminine wearer and those who appreciate classic watch proportions alike. For the first time, it comes set with baguette diamonds on the bezel and dial, and a sunray-brushed dial in Piaget Blue, limited to an edition of 88 pieces.

The baguette cut is known for its discretion and refinement. In the pre-SIHH 36mm Altiplano High Jewellery, the baguette diamonds frame the watch and mark out the dial quarters, allowing the intense dial hue to truly shine. This particular shade of deep blue, somewhere between cobalt and midnight blue, has defined the maison through the decades and most recently anchored the anniversary collection of Piaget Altiplano watches shown at the 2017 SIHH. Like the sky itself, the dial reveals different aspects of appearance under varying levels of illumination, the sunray finish creating a hypnotic play of light and shade that is almost alive in its brilliance.

The celestial influence becomes even more pronounced in the 41mm white-gold Altiplano Tourbillon, distinguished by a blue meteorite dial encircled by diamonds. Hours and minutes are indicated via the hallmark Piaget Altiplano baton hands and indices at eight o’clock, while the whirling dance of the flying tourbillon at the two o’clock position recalls the rotation of planetary bodies in a dark blue firmament.

The 41mm Altiplano Tourbillon, limited to 28 pieces, represents the height of Piaget’s prowess in gem-setting, decorative stone dials and ultra-thin high watchmaking. Completing the trio of Piaget’s pre-SIHH creations is, fittingly, a watch that embodies the purest expressions of essential Piaget — the pink-gold 40mm Altiplano with grey meteorite dial and a simple distillation of time told in hours and minutes, with a date window at three o’clock.

The combination of pink gold with the grey meteorite and pink-gold indices is a step removed from the high-contrast beauty of the 36mm and 41mm models, but more fully showcases the subtle nuances of the meteorite as a material. The 40mm Piaget Altiplano in pink gold with grey meteorite dial is limited to an edition of 300 pieces.

The strength of an original watchmaking manufacture

The history of Piaget is inextricably linked with the history of innovative fine watchmaking, particularly in the area of ultra-thin movements. Milestone records include the hand-wound calibre 9P of 1957, the self-winding calibre 12P of 1960, and more recently the 1200P of 2010 and the extraordinary 2mm-thick Piaget Altiplano Ultimate Concept presented at the 2018 SIHH (read more about here).

Ultra-thin watchmaking is so specific in its scope and the technical skills required that it is frequently compared to complicated watchmaking in terms of the level of challenge involved. In this way, it is similar to skeletonising, a technique that Piaget has also shown considerable mastery in via the 1200S ultra-thin openworked movement.

At manufacture Piaget, ultra-thin watchmaking is not seen only as an end goal in and of itself. It is a highly developed expertise that is parlayed into some of the most aesthetically adventurous and artisanal timepieces created in the history of fine watchmaking.

The price for the Piaget Altiplano with grey meteorite dial G0A44051 is CHF 24,500 before taxes.